For the performance T O W E R at the Amsterdam Fringe Festival, writer Basak Layic, director Mara van Nes and actor Sipan Sezgin Tekin came together for two weeks in Theater van Deyssel (Frascati) to investigate connectedness. For this 60-minute performance, they wrote a new myth based on the old story of The Tower of Babel.

The Tower of Babel tells a story about the duality of human connection; the desire for unity on a global level and, at the same time, an increasingly compartmentalised world view. How do we move between unity and separation? How do we stay connected if we no longer share the same ground but build ever higher towers?

"We live in a world in which we oppose each other, in which we understand each other less and less. With T O W E R we want to make an attempt to come together, to build together; a tower as a metaphor for connection; a new world order. And at the same time we want show the impossibility of this, because the tower will fall again and again, but we keep trying"

The performance T O W E R was created through periods of work and research in 2021/2022 under the working title “Rebuilding The City”. A search for collectivity 3.0. The first research week consisted of an interactive work session with the public in the summer of 2021. During this research, the story about the Tower of Babel was discussed for the first time. A biblical story from Genesis that tells the story of a tribe, after the first flood, who speak one language and decide to migrate eastward to the land of Shinar. Here they decide to build a city and, fearing a second flood, a tower that can reach the sky so that humanity can leave the earth and take over god's throne. God punishes the people for their pride by destroying the tower and dividing mankind into separate tribes and languages.

In December 2021, Basak Layic and Mara van Nes continued to work as a duo during a residency at Theater Frascati in Theater van Deyssel (Amsterdam Nieuw-West). They talked to local residents in Slotermeer about the approaching gentrification of the neighbourhood. They used wooden blocks to visualize their city together with the residents. Inspired by these conversations, Layic and van Nes collected insights and interpretations of the story of the Tower of Babel. The story of people building a tower to heaven together and a god punishing them for this has many equivalents in other cultures; from the Sumerians to the Cherokee. The meanings of this archetypal story became a guiding principle in the research for the performance at Fringe Festival.

“The myth of the Tower of Babel proved more relevant than ever. We imagined that The Second Tower of Babel has already been built, under the influence of big cooperations and technological progress. Although our desire for progress today is no longer aimed at reaching a heaven far above the clouds, we nevertheless try to play God. In our drive for progress and improvement, we think we can come together more in 'the global village', while in reality we may be getting further and further apart”

In the summer of 2022, Layic and van Nes decided to continue their research and started a collaboration with theater maker and actor Sipan Sezgin Tekin. They were invited for another residency at Theater Frascati on location in Theater van Deyssel. Here they collectively made the 60-minute performance TOWER in 3 weeks, with the theme of 'connectedness', which they performed 13 times for an audience during the Amsterdam Fringe Festival in September. Using 600 bricks, they built a decor and audience arrangement in which the technology was controlled from the floor and the main character (played by Tekin) told his fictional story on, under and between the audience. The final scene took place outside, in the reality of the Lodewijk van Deysselstraat, around a fire.

For TOWER they wrote a script, a new myth, with three characters. In an intimate setting, surrounded by the audience, the story of climbing the tower is told in an interdisciplinary way (with soundscape and lighting design). In three repeated attempts, the audience is taken along by the main character De Digger (Sipan Sezgin Tekin), who has built a tower following his father and grandfather and leads the people of Shinar to heaven. Along the way, De Graver conducts dialogues with The High Priest (Mara van Nes) and The Scientist (Basak Layic) who sharpen the motives for climbing the tower. The inescapable fate of the tower collapsing (by a God punishing humanity for its pride) creates a repeating cycle in which De Graver increasingly questions the pursuit of progress.

Parallel to the mythical storyline, there is a meta-level conflict between the creators of the performance. The actor wants to escape from the written script, but the writer (who plays the scientist) and the director (who plays the priest) force the actor to continue playing through light and sound. The audience is addressed as being the people of Shinar and has an interactive function in the performance.

During this creative process, the three makers also continuously explored their own mutual convergence as three makers from different disciplines, with different cultural backgrounds (Turkish, Dutch and Kurdish), in a shared generation. They went in search of their own collective way of working as a writer, director and actor. In this way, the story of The Tower of Babel became not only the story of the performance, but also the story of this creative process in which the collective and the individual began to intertwine in multilingualism. 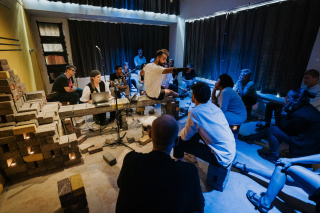 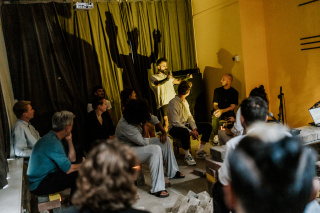 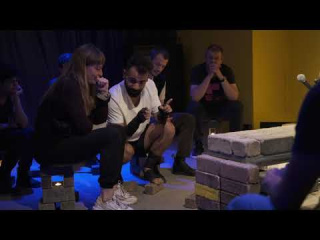 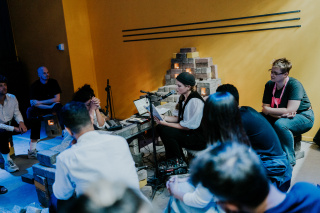 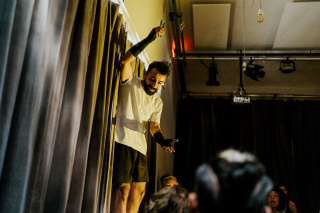 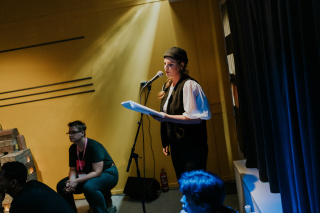 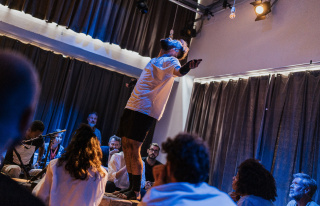 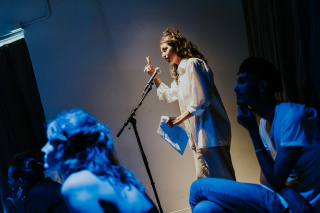 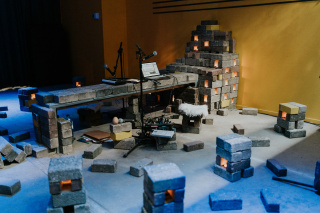 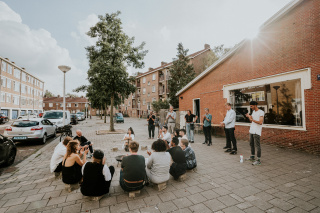 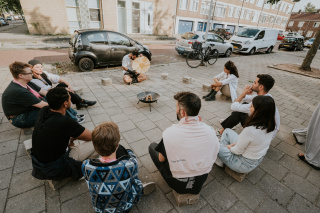