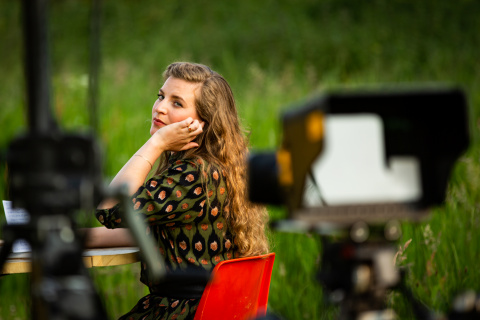 Mara van Nes (1993) is a theatre maker, program maker and moderator who often makes interventions in a social-artistic context. She often collaborates with experts who, in her opinion, are not yet visible enough in the public debate. Her performances are often participative and combine philosophical forms of conversation with visual experiences. As a program maker she mainly worked in the cultural sector, but through her social-artistic practice she is also increasingly broaching new connections and topics outside of this. She has often collaborated with Theater DEGASTEN, Oerol Festival, Building Conversation, Podium Mozaiek, Tolhuistuin and Theater Frascati.

Mara graduated in 2017 from the Academy of Theater and Dance (AHK) in the direction of theater maker and teacher. From 2017 to 2020 she led (part-time) the education department of theater group DEGASTEN. In 2017 she was assistant director to Adelheid Roosen during the WijkSafari in Amsterdam North. In the same year her performance 'Paradise now How?' was performed at the Right About Now Festival and in 2018 her performance 'Tossamossa' played at the RRReuring Festival. In the summer of 2019, she worked with colleague and sparring partner Gerbrand Bos on the theatrical installation 'Actual Reality: For a Sparrow, my house is a rock' during Boslab Festival and at NDSM OPEN. In 2020, she began collaborating with writer/performer Basak Layic and premiered at the Fringe Festival with 'The Millennial Immigrant'. A film version of this performance premiered at RRReuring Festival online in the spring of 2021. In 2020/2021 she became a programmer for Tolhuistuin (replacing Charlotte Verhoef's maternity leave). She is one of the initiators and board members (until 2022) of Platform The Need For Legacy (winner Prosenicum Prize 2021, Dutch Theater Festival)

In 2021, together with Tomas Leijen, she organized a performative demonstration on Dam Square 'NOMAD: How to build a Monument', under the wings of DEGASTEN. And together with Pleun Peters she made and performed the performance 'Night Vision|Day Quest' on an industrial roof in Bruges during the Konvooi Festival. She also conducted an artistic research into collectivity 3.0 together with colleagues JB Harris, Basak Layic and Inge Koks. in continuation of this research Basak and Mara started the project 'Rebuilding the City' during a residency in Frascati. They will continue working on this dialogical artform in 2022.

At the beginning of 2022 Mara and Tomas made the sequel to the Dam Square demonstration, titled NOT NOT INCLUDED, at the square and from Frascati theater with DEGASTEN NOMAD. And together with Toni Blackwell she started working on a new installation with young creatives at Right About Now Inc, celebrating the reopening of the clubscene and nightlife after COVID-19.

In the coming period she will further develop her maker vision and curatorial skills, focusing mainly on creating collective and participatory work, programs, podcasts, conversation forms and installations.