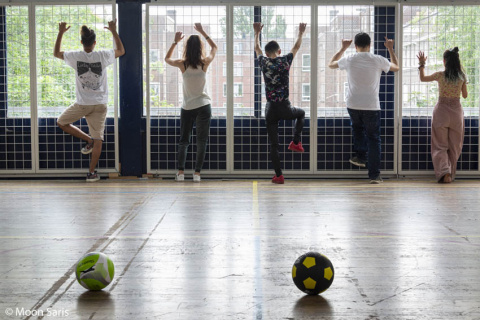 "I HAVE ALWAYS BEEN FIGHTING FOR FREEDOM. WHEN I WAS 20 YEARS OLD I WENT TO PRISON FOR THE FIRST TIME. I WAS PLAYING A PINK FLOYD SONG IN A PUBLIC PARK, THE GUARD: SCREAMED AND POINTED AT ME (IN SYRIAN) 'THERE HE IS MASTER, I KNOW IT WAS HIM, BECAUSE HE HAS A PIANO ON HIS BACK!' (I WAS CARRYING MY GUITAR).
WHY DID I PLAY PINK FLOYD?
BECAUSE IT IS AGAINST MIND CONTROL"

In the fall of 2018 a collaboration was started between theatre group DEGASTEN and platform BOOST. BOOST is a meeting place where people with a refugee background and people from the Amsterdam-east neighbourhood work together on integration. Most of the projects are focussed on language, like the language-cafe. But there are also other activities such as info-cafe, sewing workshops and boxing classes. We created a theater workshop open for anyone to join. From this workshop series a divers group of people were gathered and together we created a piece which we performed on location at BOOST.

It became apparent that it was important to create a space once a week where not just spoken or written language (in dutch) was the main topic, but where many different forms of expression were to be used. We decided to work from de concept of 'freedom'. freedom to express yourself. What is freedom here in The Netherlands opposed to a country without a democracy?

It was interesting to discover that not everybody felt necessarily more free after they left dictatorschip. Freedom to go wherever you want is granted here in The Netherlands, to speak your mind, to believe what you want in your own way. But at the same time you lose a fundamental part; the freedom of being able to communicate and express yourself. And being called 'a refugee' creates imprisonment in the form of stigma and bias.

We worked to combine different styles; from storytelling to abstract physical theatre. Empowerment was an important part of the piece. To have the liberty of telling your story in a controlled setting. For some this was, for example, to tell the audience the story of how the Syrian revolution started in Daraa. This is a story that is not often told as it is forbidden and can be dangerous to tell in public.

As a theatre maker I think it is important to always find the right balance between free expression and fixed shapes to create social art. I can deliver a fixed structure in which a performer is free and also safe to experiment. For example; on scene in de piece was based on an american drinking game 'never have I ever'. We created a spacious version of this game; when you have done something you start walking, if you haven't you stand still. The game started quite innocently, but became more and more intense because of some on the experiences of the performers. Have you ever escaped form prison? Had 20 rifles pointed at you? Jumped form a burning building? Because the scene remained an improvisation, even during the presentation, the performers had to really build on each others timing and create space for humor between themselves. It became a strange lighthearted battle of horrible scenarios of wars and regimes. The piece ended with a kurdish freedom song and a manifestation of chalk-board-protest-signs with cultural sayings in different languages, like 'Never ride a camel sideways', that kept being erased and over-written with new sayings. 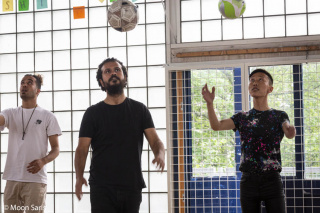 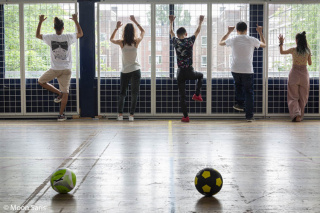 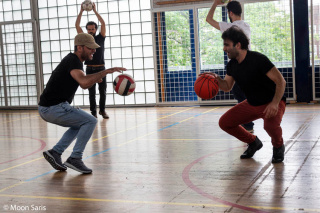 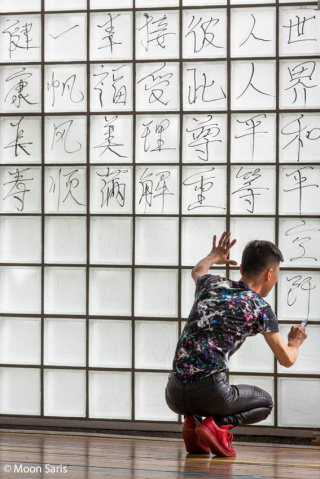 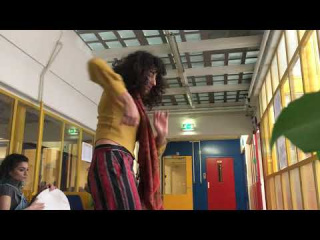 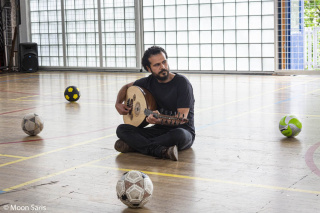