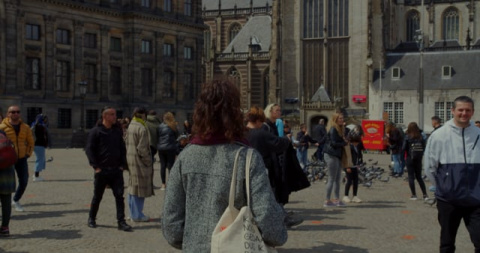 NOMAD: HOW TO BUILD A MONUMENT
a flashmob performance on Dam Square
Agenda

DEGASTEN NOMAD is a group of young people with different nationalities that work together to make performances. DEGASTEN NOMAD originated from a integration and language platform called BOOST in Amsterdam East in collaboration with theatre group DEGASTEN.

NOMAD was started in 2019 by teacher and theatre maker Mara van Nes. Tomas Leijen joined last year as a teacher/maker and dramaturg. In the last years they created several theatrical performances always looking for new forms that arise from a strong conceptual starting point. The group consists of ten to fifteen people, surrounded by a bigger network of international millennials. Because of the lockdown we are working in small clusters of workshops with variations of people.

How to build a monument

‘How to build a monument’ is a project inspired by the etymological meaning of the word monument. The word "monument" comes from the Greek mnemosynon and the Latin moneo, which means 'to remind', 'to advise' or 'to warn', suggesting a monument allows us to see the past thus helping us visualize what is to come in the future.

This meaning enables us to look at the question ‘how to build a monument?’ as a way of making a tribute to something meaningful as well as making a warning for coming generations.

With this research done we asked the group the following questions:

If there would be a monument made for/of you today: What shape and colour(s) would it have, what material would be used? Is it in one piece or is it fragmented? What is the movement or non-movement that it makes an where would it stand?  What would surround it? What would the sign next to it say? Who would see it? Who would pass by without looking at it and who do you want to see it?

After answering these questions several monologues from the perspective of the monument they had described were written.

“You passed across me for years and took photos with me, but did you listen? Did you look into my eyes and feel what lives within me? I guess you didn’t. Because you kept exploiting me, unknowing that you were exploiting yourselves. And now the heat is about to make me melt, but guess what? That would add more meaning to my form. So, you would see what global warming has done to me. I’m afraid that in a few years from now “us” would disappear. And I am not talking about me as a symbol of life. I mean life itself. It would perish. Perhaps make the human existence perish? I’m unaware if this would be good or bad because if you perish, life might nourish. Greens might sprout through the cement of your tall buildings. The will of life would find itself again but who would be there to notice it? Who would be there to breathe it? Now that many animals are extinct, glaciers are fading away, why would you want to procreate, why would you want to stay?”

This text gives a great insight in the direction we wventured in. Climate change and our connection to nature is an important theme in our conversations and work. In this we also found a connection to the idea circles. They are like little atmospheres, protecting us, suffocating us and at the same time they could be ‘pop-up monuments’?

Questions that are strongly connected to this topic are how do we take care of our earth and atmosphere and how can we be aware of the future generations and the legacy that we leave behind? Roman Krznaric writes about this is his book ‘The Good Ancestor’. DEGASTEN NOMAD approaches these questions as an intersection between colonialism, capitalism and climate change. In a way we are colonizing the future without being aware about that. We are exploiting the capital of those who are not yet born.

So thinking about monuments and decolonizing the future: maybe a monument is not to be made of bricks but It might be a gathering of things and plants and people, a monument as a social intervention or even a ritual? 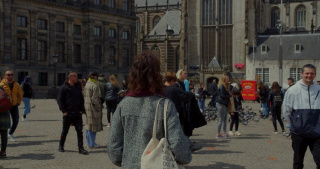 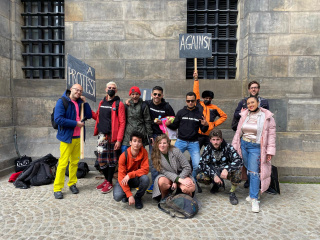